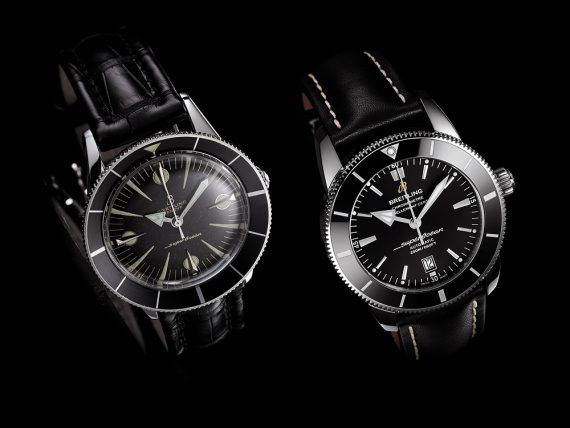 For a brand most famous for its vintage and modern aviation watches, Breitling has been no stranger over the past 60 years to branching outside its usual airborne comfort zone. It all began in 1957 with the company’s release of a dive watch constructed to compete with some of that era’s greats, the original Breitling Superocean. Upon the arrival of the Omega Seamasters, Rolex Submariners, and Blancpain Fifty Fathomses, the growing trend of hobby diving ripened the market for new players and new designs, and with this in mind Breitling sought out and succeeded to carve itself a name under the sea as well as in the sky. Today, the Superocean series (or more accurately the Superocean II series), is a collection of robust and highly visible dive watches that combines the styles of dial complexity and rugged construction the brand is best known for. Now, first in 2007 with the Superocean Heritage, and again this year with the Superocean Heritage II, Breitling is once again returning to the roots of the series to produce a watch inspired by the utilitarian pieces that started it all. read more 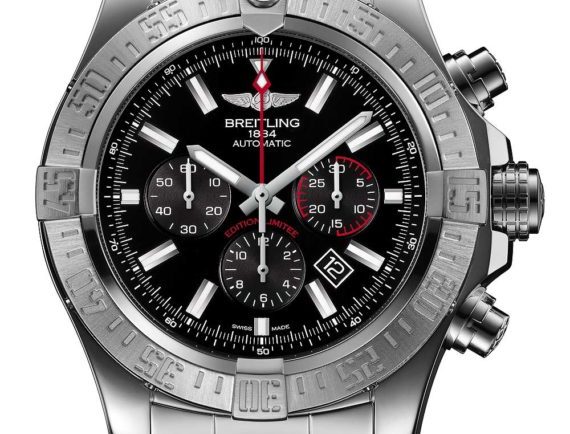 While there is very little that could be called subtle about this weighty, 48-mm timepiece, the details denoting the Super Avenger 01 as a limited edition qualify, namely the red “Edition Limitée” inscription above the 6 o’clock subdial, and the red sections of track on the periphery of the 3 o’clock subdial. The dial, in Breitling’s hallmark “Volcano Black,” features the familiar three-register arrangement, with tone-on-tone, snailed subdials at 3 o’clock, for the 30-minute chrono counter, 6 o’clock for the 12-hour chrono counter, and 9 o’clock for the running seconds. Picking up the details of the dial, the central chronograph seconds hand is also in red, and tallies elapsed times to 1/4 second. The date appears in a window at 4:30; the hour and minute hands and the applied hour indices are all suitably large and legible, with luminescent coating. read more 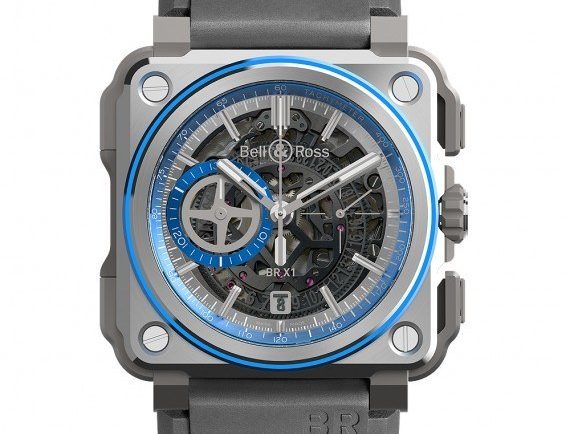 As 2016 draws to a close and we all prepare for the launch of new watches in 2017 — starting in January at Geneva’s SIHH watch fair — we take a look back at some of the most notable timepieces launched at this year’s SIHH and Baselworld, in several popular categories. Today, we spotlight eight notable pilots’ and aviation-influenced watches that made it onto our radar.

Bell & Ross, already experienced in making watches for pilots, has now created a mechanical chronograph for astronauts. The Bell & Ross BR-X1 Hyperstellar has been engineered to withstand the rigors of outer space missions. Bell & Ross used a combination of grade 5 titanium and blue anodized aluminum for the square, 45-mm case. Both tough-yet-lightweight materials are used widely in the aerospace industry; aluminum is prized for its ability to generate an impermeable, corrosion-resistant oxide layer and titanium for both its corrosion-resistant properties and biocompatibility. The combination of colors also are symbolic of space exploration: blue for the Earth, gray for the moon. The case cover, middle, and center are made of the micro-blasted and polished titanium, while the aluminum is used for the protective bezel insert. Adding to the case’s near-impermeability is a bumper made of titanium and rubber that acts as a protective shell. Ergonomic rubber-grip chronograph push-buttons are easily handled even by hands wearing thick gloves, and the dial design emphasizes easily readability in all conditions. The skeletonized, automatic Caliber BR-CAL.313, beneath the grey-tinted sapphire dial, has an “X”-shaped upper bridge treated with black DLC (Diamond-Like Carbon) and a chronograph function with a central 60-second counter and a 30-minute subdial at 9 o’clock that uses an aluminum disk reminiscent of turbine blades, rather than a conventional hand. The satin-finished titanium caseback is secured by screws, and has a small “planetary observation porthole” in the upper half, providing a glimpse of the movement’s balance. read more 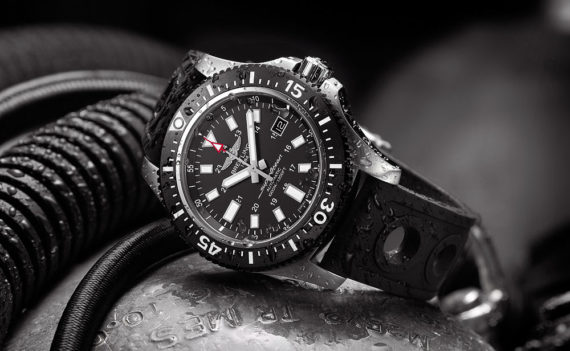 Pilot’s-watch specialist Breitling continues to extend its Superocean range of professional-grade divers’ timepieces — first introduced in 1957 and used as the chassis for an all-new high-tech chronograph movement in 2016 — as part of the sport-luxury brand’s ongoing conquest of the sea as well as the air. The latest models come from the Breitling Superocean 44 Special collection, outfitted with either a blue or black ceramic bezel.

Breitling refers to the Superocean 44 Special as its “ocean pilot,” as it differs aesthetically from the Superocean and Superocean II series by marrying more of the brand’s classic aviation-watch DNA with the traditional elements of diving watches. As the numeral in its name implies, the watch has a 44-mm steel case that is satin-finished on its top surface and polished on its sides and on the crown. The ratcheted, unidirectional rotating bezel — here made of ultra-hard, scratch-resistant ceramic in either “Volcano” black or “Mariner” blue, matching the dials — is designed to be easy to grip and operate for divers wearing gloves. The case is fitted with a twin-gasket screw-locked crown, which helps guarantee the watch’s water-resistance to a depth of 1,000 meters (3,300 feet), and a security valve to balance out pressure differences inside and outside the case while the watch and its owner are submerged. read more 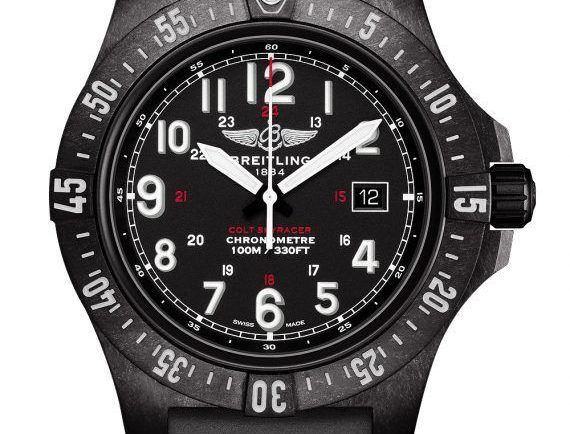 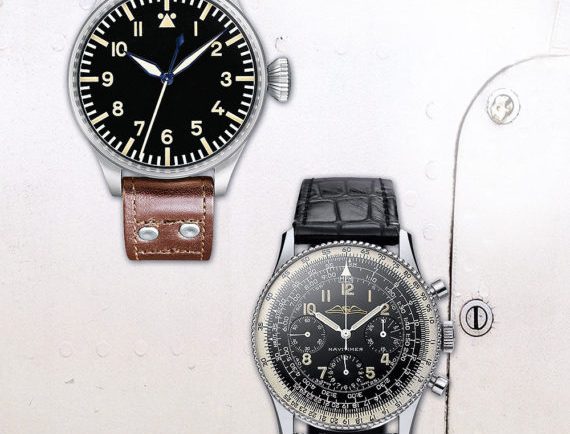 When longtime IWC head honcho Georges Kern left his position at Richemont to become CEO of0 Breitling Watches Replica, some saw it as the latest salvo in the two Swiss brands’ historical duel for horological supremacy in the air. Here we explore in depth how both brands have made their marks on the history and evolution of pilots’ watches.

In contrast to dive watches, pilots’ watches do not have to meet any objective criteria. Good legibility under all light conditions is generally all that’s needed, and good design makes the watches what they are. A pilots’ watch looks like a pilots’ watch. But it’s precisely the design that shows the different approaches to pilots’ watches by IWC andBreitling Watches Miami Replica. Both brands base their own unique designs on their long traditions and histories. In the case of IWC, the company relies heavily on its Big Pilot’s Watch from 1940, which it, and other companies like A. Lange & Söhne, supplied to the German Air Force. read more 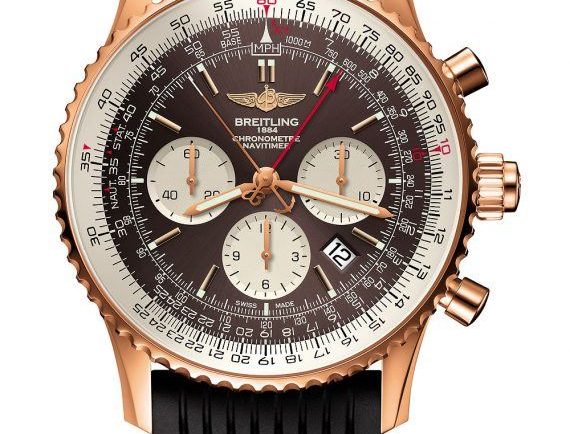 Breitling pens the latest chapter in its prestigious history of aviation-inspired chronograph watches at Baselworld 2017 this week, with the launch of the new Navitimer Rattrapante, which features the brand’s first in-house-made, split-seconds chronograph movement.

The watch’s movement,Breitling Watches Tax Free Replica Caliber B03, fittingly makes its debut inside the case of the Navitimer, one of Breitling’s most iconic models. It continues the company’s industry-influencing historical role in the field of mechanical chronographs, which includes such milestones as the first chronograph with an independent push-piece, in 1915; the first with a second independent push-piece, in 1934; one of the first self-winding chronograph movements, in the pivotal year of 1969; and the development of the classic Duograph in 1944, a highly collectible piece with an extra-thin split-seconds chrono movement, which could be considered this new model’s spiritual ancestor. read more 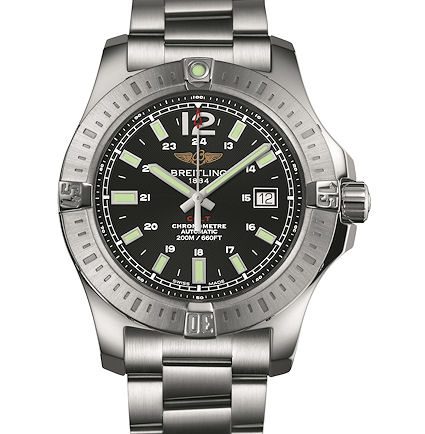 Many brands offer aviation-themed timepieces, but when you think of fighter pilots and the instrument watches made for them, chances are that one brand comes to mind: Breitling. Here are fiveBreitling Watches 1884 Replica watches that are in stores now* at accessible prices.

Breitling created the Colt in the 1980s. Originally intended for use by the armed forces, the watch developed a wider following in the civilian world and soon established itself as the most accessible Breitling. The Colt features many of the visual cues that give Breitling watches their unmistakable look. The broad unidirectional rotating bezel with a satin-brushed finish and engraved hour-markers features the brand’s trademark rider tabs. These tabs improve the grip on the bezel, making it easy to rotate even when wearing gloves. They also help to protect the glare-resistant sapphire crystal, and they can be used to track elapsed time or to serve as a reminder for a future event. The Breitling Colt’s 44-mm case is water-resistant to 200 meters. The Colt Automatic is powered by the mechanical Breitling Caliber 17, which is a COSC-certified chronometer. The Colt is available with black, blue and silver dials, and a variety of straps and bracelets. The Breitling Colt Automatic is priced from $3,090. read more 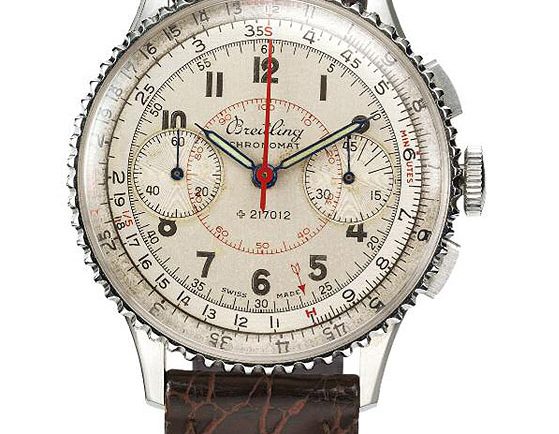 Pilots rely on Breitling’s chronographs, but calendars, world timers and divers’ watches also are part of the brand’s 130-plus-year history. Here are five importantBreitling Watches Old Models Replica watches that helped define the brand’s identity from 1915 through the modern day.

Launched in 1941, the Breitling Chronomat was based on a patent document that Breitling submitted in 1940: patent number 217012 granted protection for an instrument-style wristwatch with a circular slide rule. This clever system made it quick and relatively easy to perform various measurements and mathematical operations, e.g., the conversion of speeds or distances from one unit of measurement to another, multiplication, division, and cross-multiplication. This new timepiece attracted many aficionados in sports and industry, and technicians appreciated its special features, which made their work easier. Later versions of the Chronomat with different cases and dials were the earliest ancestors of Breitling’s legendary Navitimer. The watch shown here contains Venus Caliber 175. A special feature of this watch is a counter for 45 elapsed minutes – a detail welcomed by soccer fans. read more 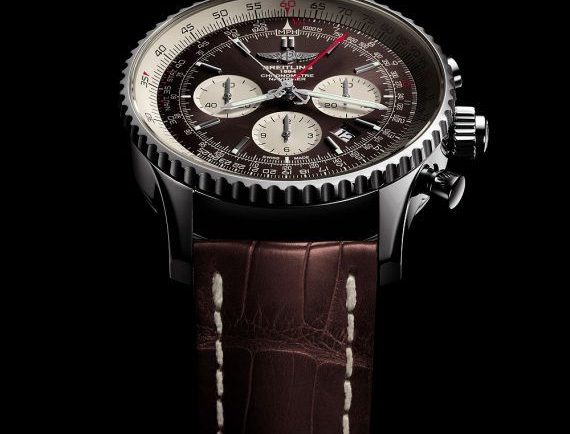 Continuing our rundown of notable watches in several categories from the Baselworld 2017 watch fair, we turn our attention to five new chronographs — several of them representing firsts for their respective brands — that stood out from the pack. Read on for details, and remember — Father’s Day is only a few days away.

Breitling built on its long history of aviation-inspired chronograph watches this year with the launch of the Breitling Navitimer Rattrapante, which features the brand’s first in-house-made, split-seconds chronograph movement. That movement, Caliber B03, has a modular architecture is built upon the base Caliber B01, Breitling’s first manufacture movement, which is equipped with automatic winding, date indication, an integrated 1/4-second chronograph function, and a 70-hour power reserve. The split-seconds module added to this high-performance horological engine is comprised of only 28 parts, and fitted between the mainplate and calendar mechanism — a construction that not only simplifies assembly but also maintenance: a watchmaker can remove the module as a single block for servicing and repairs. read more